As pointed out by Stepen Coles yesterday, Ars Technica wrote about a modified version of Lucida Grande, “optimized for Retina displays”, in their review of the new Mac OS 10.9 “Mavericks”. So, what exactly could make a font “optimized for Retina” and which modifications did Apple make?

Always curious about these kinds of slight modifications depending on the technology, resolution or size, I had a quick look at the new Lucida Grande fonts that come with Mavericks. The first noticeable thing is that instead of two fonts – Regular and Bold – the new .ttc font collections contains four fonts, two of them being the supposedly retina-optimized versions. There must be some mechanism in Mavericks that swaps out the fonts depending on the display. 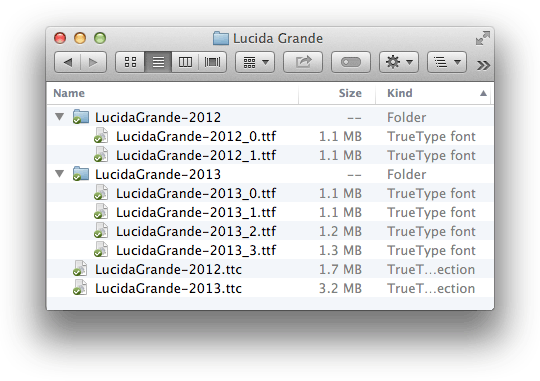 The more interesting question is, of course, what is the difference between the old and new design, which I will simply refer to as “2012” and “2013” here. After opening both versions of the Regular style, my FMX Compare Fonts macro spits out that outlines were changed in 115 glyphs, components were modified in 43 glyphs, metrics were adjusted in 64 glyphs and kerning pairs were added.

Let’s have a look at the redesign in detail:

Did you ever know or notice that Lucida Grande did not have any kerning whatsoever? In any case, now it does. My assumption is that the fonts were optimized for Mac OS, which, presumably did not support kerning for the relevant UI elements so kerning was dropped. Does this mean that kerning was added for the “Retina” version because now Mac OS does support kerning in UI elements on Retina displays? Unfortunately, I do not have a computer to test this; feel free let me know if you find out.

[update] Thanks to Stephen’s screen shot from Finder on a Retina display, this has been confirmed. 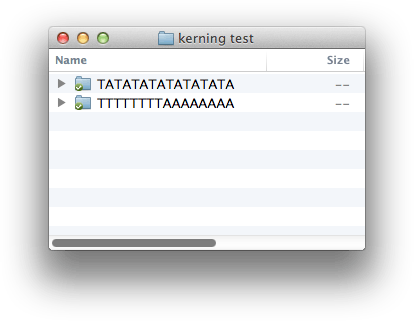 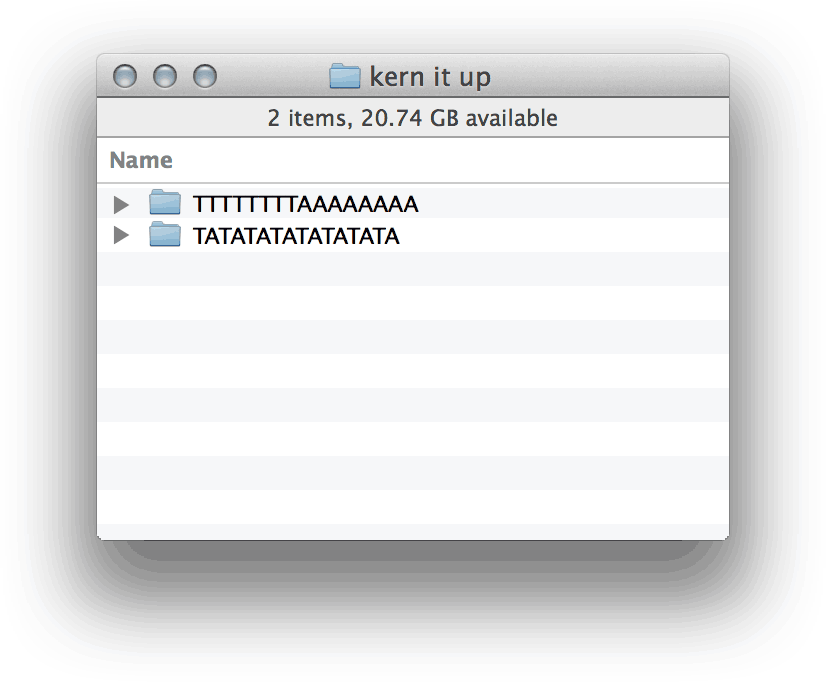 On a Retina display, kerning is applied

Is kerning a resolution-related update? One could argue that kerning does not make much sense in low-resolution full-pixel environments. If each character has a full-pixel width and can only be kerned by multiples of one pixel then we have many kerning values that are either too small to have an effect (since they are less than half a pixel) or, even worse, we end up with over-kerning for those pairs that are rounded away from zero. I have observed this problem when I do proofing for my web fonts and I sometimes tone down some kerning pairs for the screen version in order to avoid these cases where a kerning value rounded to the full pixel is too much. 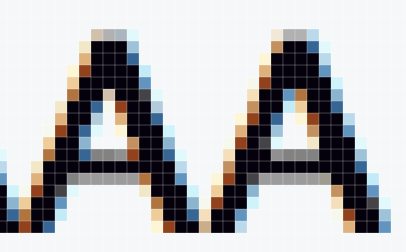 Detail of the above screenshot. On a retina display, subpixel positioning is activated. Note the differences between the pixel images of the two A’s

In that sense, the real reason why kerning makes more sense in Retina mode is not the increased resolution but the subpixel-positioning that is not active on standard displays. This means that in Retina mode, characters can have fractional widths and, of course, we can have fractional kerning values. Even kerning less than one pixel is expressed through a different sup-pixel positioning of the character shapes in relation to the pixel grid. Can we call it “Retina-optimized” through kerning? I’m fine with that. [end of update]

Some characters seem to be consciously re-designed. These are some changes I found most noticeable:

It seems that in fact, some of the features in Lucida that make it a particularly robust design were re-touched for the “Retina” version. 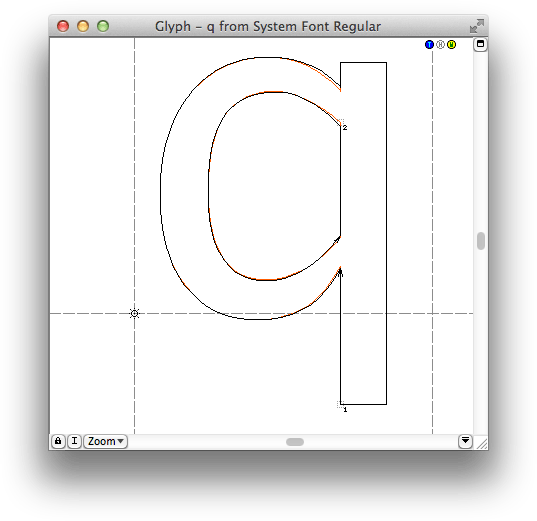 If you look carefully at the q, you will notice that the thinning of the stroke as it touches the straight is reduced. In my opinion, calling this tweak a “Retina optimization” is justified although it is more the removal of a low-resolution optimization. 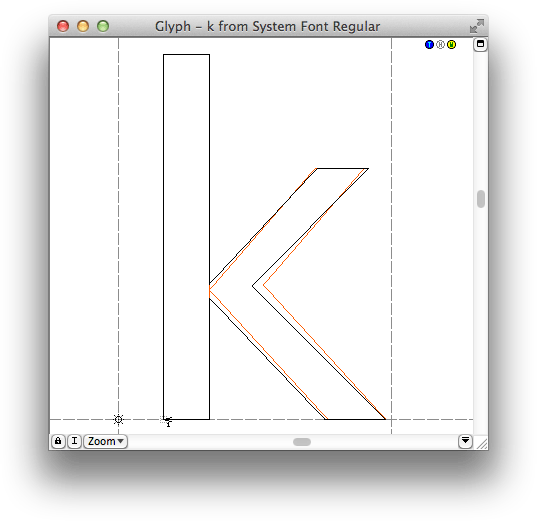 The k is a less obvious case. In the older version, the diagonals are barely touching the upright, which is certainly a feature that helps against clogging up in low resolutions. However, it is also a stylistic decision and removing it is not necessarily an improvement even though it is less necessary in a high-resolution environment. 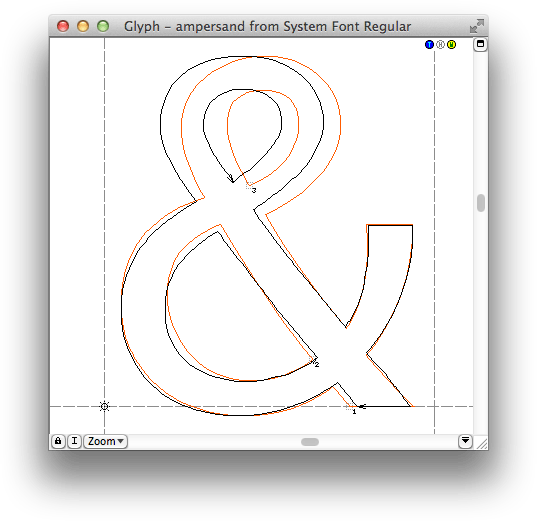 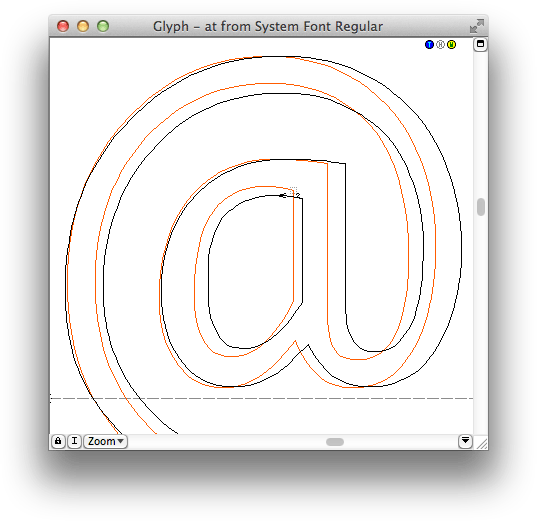 Redesigned @ of the new Lucida Grande, old version in red

The new @ and & are clearly an improvement, they just looked a bit wonky before, as you can see in the overview above. While this is obviously not a resolution-specific adjustment, I appreciate that they took the chance and made some further corrections to the design. It’s a pity that non-Retina user like me won’t get to see these improvements, though. 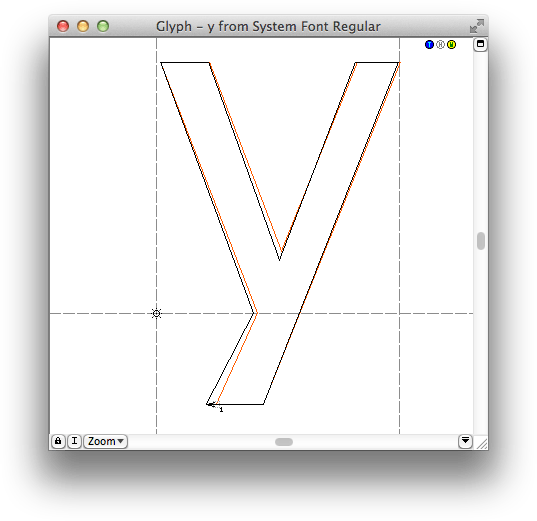 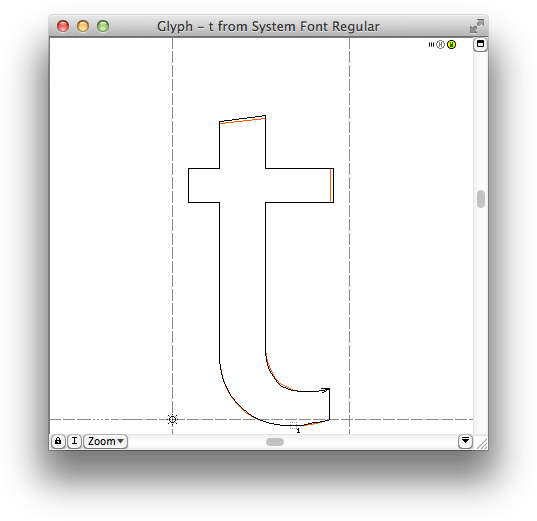 Some other changes such as to the t and y are a bit difficult to understand. To me, the thickening of the y tail certainly looks wrong and does not have a functional purpose.

The new Lucida Grande was not only adjusted in terms of character shapes. The spacing, i.e. the space before and after each character, was also redesigned, most notably the s and x.

The old s was clearly too loosely spaced, as a few of my usual test words reveal. I’m glad this was fixed but hasn’t the left side-bearing of the s become a bit too tight?

For file size efficiency and ease of design, fonts typically contain accented characters built of components, i.e. references to the base letter and the acent. For some reason the new Lucida Grande has some of them decomposed, i.e. as plain outlines. 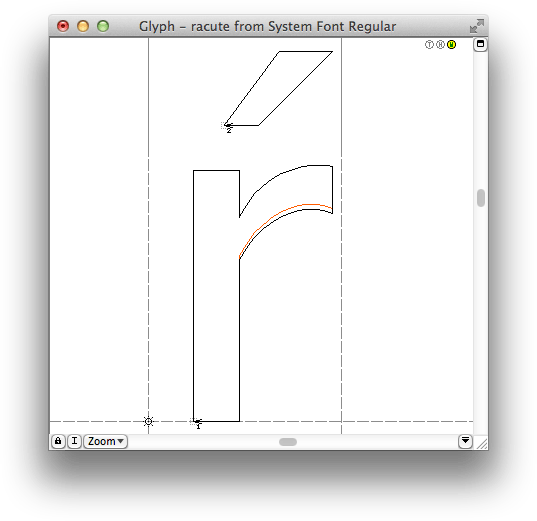 The r with acute in the new Lucida Grande. The plain r is shown in red.

Is it a technical glitch? Some of the accented characters show deviations from the plain base letters, which is surely not intentional.

I’m glad to see this update as it shows Apple still takes typography seriously. Although like most designers, I don’t like the use of Helvetica as a UI font in iOS, there are also promising font-related developments. While small tweaks like the ones we looked at here may seem nearly insignificant, it shows there are efforts to improve type in Apples OSes.

As another example, I’m quite excited to see how the new size-aware “Dynamic Type” in iOS develops and/or spreads. I have long been interested in the subject and have done some research myself, published under the somewhat clumsy name “Size-specific adjustments to type designs”. Apple is now using the term “size-specific adjustments” in their documents, which makes me enjoy the illusion I might even have contributed a little to that development.